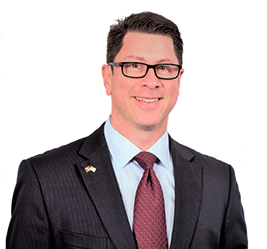 Bill is a proud 6th generation native of the oldest city in the United States of America, St. Augustine, Florida and a former United State Marine. Following his service in the Marine Corps, he received a Bachelor of Arts Degree from University of South Florida. While completing his undergraduate education, Bill worked as a complex litigation paralegal. Having worked in the trenches for several years, Bill ultimately decided to attend Cumberland School of Law at Samford University in Birmingham, Alabama. While attending law school, he was a Senior Editor of the American Journal of Trial Advocacy, the nations oldest law review dedicated to the art of trial advocacy. He also was a member of Cumberland’s perennially nationally ranked trial team, having won several trial competitions. To fulfill his goal of having a strong business background, Bill also obtained his Masters in Business Administration from Samford University.

Bill is an experienced trial attorney whose practice is focused on catastrophic injury defense litigation, with an emphasis on commercial trucking and vehicular accidents, construction site injury litigation, premises liability & product liability and defense of labor and employment matters. Bill also provides legal advice for business owners and litigates disputes between businesses. Bill has tried many cases involving wrongful death, quadriplegia, brain injury and other catastrophic accidents, as well as Sarbanes-Oxley Act/Florida Whistle Blower, age discrimination, and racial discrimination matters to verdict in both Florida, Indiana, and Alabama. Bill’s practice includes all State and Federal courts in the entire Florida peninsula from the Panhandle area all the way down to Key West.